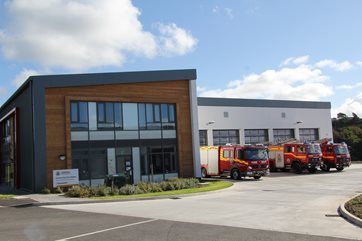 Posted at 17:04h in Latest News by admin
0 Likes
Share

The new headquarters for Cornwall Fire, Rescue and Community Safety Service were officially opened by HRH the Duke of Kent at the end of September.

Firefighters, officers, control and corporate staff from the service gathered at the site in Tolvaddon, to greet the Royal party. They were also joined by local councillors, dignitaries as well as the design and construction team.

During the visit His Royal Highness was shown around the new headquarters, which became operational on 1st September 2015 and given a training demonstration of a traffic accident and rope rescue.

The new HQ is the final stage in the Camborne, Pool, Redruth and Hayle Emergency Cover programme, which involved relocating Camborne and Redruth Community Fire Stations, as well as critical support services including Fire Control, Training and Development and Engineering Workshops and Stores, to two new sites in Tolvaddon and Hayle.

Ward Williams Associates provided Quantity Surveying services throughout the duration of both projects. Richard Salmon, Lead Quantity Surveyor commented: “We are delighted to have been involved in these schemes, which provide purpose built facilities for this essential service delivery, which is receiving great feedback from the building users”.