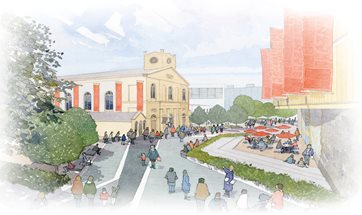 Posted at 17:34h in Latest News by admin
0 Likes
Share

The Plymouth History Centre will transform the existing City Museum and Art Gallery in North Hill into a cutting-edge, interactive centre, three times its existing size. It will provide a new home for the city’s five most fascinating and vast historic collections, making them more accessible to everyone.

The Atkins, Exeter based team will be leading the project, with Ward Williams Associates providing project management services.

Jeremy Dunn, Senior Associate Director, said: “It is great to be working with Atkins on this exciting project. Working on this hugely exciting opportunity to bring together the five collections in both new and restored historically significant buildings, is a challenge that we look forward to with relish.”

WWA have a track record of involvement with significant heritage projects including the Heartlands Project, and the proposed Melville hotel and Factory Cooperage projects in the Royal William Yard.

Andrew Gilbert, Director, said: “This project provides the city with a fantastic opportunity to showcase Plymouth’s rich heritage and history. As a local consultancy WWA has a vested interest in making this project a success and are therefore delighted to be part of the team selected to bring the Plymouth History Centre forward”

Notes:
*Heritage Grants (HG) applications are assessed in two rounds. A first-round pass is given when HLF has endorsed outline proposals and earmarked funding. A first-round pass may also include an immediate award to fund the development of the project. Detailed proposals are then considered by HLF at second-round and as long as plans have progressed satisfactorily and according to the original proposal, an award for the project is confirmed.