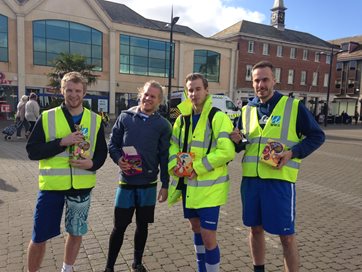 Posted at 17:03h in Community by admin
0 Likes
Share

WWA emerged victorious as winners of the 2015 Great Truro Pancake Race, retaining their title from the previous year.

The event hosted by the Rotary Club of Truro is held every Shrove Tuesday to raise money for local charities and this year was no exception with teams supporting the Cornwall Hospice and Children’s Hospice South West.

Ward Williams Associates were one of the four main sponsors on the day and Sam Thompson, Dave Collins, Laurien Bowler and Robert Portman raced, coming first in both their heats, semi-final and had the overall fastest time on the day.

Sam Thompson, Trainee Surveyor, commented: “We really enjoyed the day and are delighted to have won. The event supports some great local charities and we look forward to making it three in a row next year”.